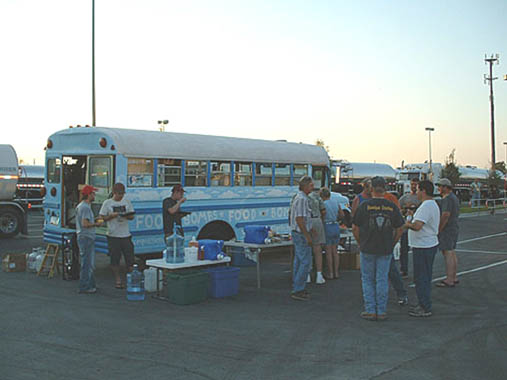 You can help Food Not Bombs feed the survivors of Katrina

PLEASE CONTINUE TO HELP! The people of New Orleans continue to rebuild in the shadows of the American media. We are still supporting the survivors. The Hartford Food Not Bombs bus arrived in New Orleans two days after Katrina passed. Our second bus (pictured above) from Tucson arrived two days later. The U.S. Government and the American Red Cross were not able to deliver food to the survivors of Katrina so Food Not Bombs set up kitchens in over 20 cities. Volunteers organized America's largest food relief effort raising little more than $10,000 for gas and transportation. Much was donated directly.

We are active across the Gulf Region working to rebuild. We have been the only organization providing regular meals. The American Red Cross, state emergency agencies, and FEMA asked everyone to call our toll free number for food relief. The current crisis is that the people of New Orleans need drinking water. This is an emergency! Since the storm swept through the gulf we have been one of the only hot meals shared on a daily bases in New Orleans. We still need volunteers, tools and food to help the people displaced by Katrina. We need people to help us repair homes and cook meals for people volunteering to rebuild New Orleans.

Photos of Food Not Bombs in New Orleans after Katrina
Read more at plenty.org

WATER NEEDED
With the summer heat wave upon us we are in desperate need for water for both volunteers as well as our distribution centers for residents.

On average we have from 200 to 250 volunteers gutting houses and working in various areas daily. We also have about 300 families coming to our distribution centers each day as well.

One of my biggest concerns with having people work in the heat is their safety from dehydration. In the past we were able to get water from a local food bank but their resources have dwindled to where they are no longer able to assist us with food and water.

At the pace that we are and should be using water we would need approximately 60,000 bottles of water per month for our volunteers and 90,000 bottles to be passed out through distribution. Unfortunately, we don't have such a supply and we have had to limit distribution to families and volunteers. With both residents and volunteers suiting up in protective gear; which includes tyvek suits, respirators, goggles, rubber boots and gloves, they are essentially cooking themselves while they work inside moldy houses with no form of air circulation. This combination with not enough water to go around is a dangerous combination.

The American Red Cross has been sending Katrina survivors to Food Not Bombs. We get many calls from people who tell us that the Red Cross gave them our toll free number. We have been able to help most of the people directed our way. You can help Food Not Bombs support the Katrina survivors by making a donation. We also have had to make a number of changes in New Orleans becuase the police have told us to move our kitchen in Washington Square Park so we moved to Saint Banard Parish. After a few weeks they told us to move again.

To get a look at our program in New orleans visit the TV program SourceCode Travel along with Free Speech TV as they cover our grassroots effort Food Not Bombs, whose volunteers got in their own vans and cars and showed up to feed disaster survivors who had been abandoned by all other governmental and official relief efforts.

Food Not Bombs groups all across the southern United States are feeding families displaced by Katrina. Help us get food and supplies past FEMA. We need clothes, cooking equipment, food, cooks and money to provide for thousands of hungry homeless people. We have no overhead, rent or salaries so every donation goes directly to helping people. Many affected by Katrina are familiar with Food Not Bombs because we have been sharing free food in communities through the area for many years. Because we are independent we can take food and supplies to areas where no other agency can reach.

This disaster may last another year or more so we intend to keep setting up Food Not Bombs field kitchens throughout the region. Food Not Bombs is encouraging the refugees to participate in cooking, serving and collecting the food. Their participation may be one of the most therapeutic things we can provide. Tens of thousands of survivors were kicked out of thier motel rooms. We believe that many of these people will be living outside homeless. Even if you can't go to the disaster area we need lots of help in your community. The number of people we need to feed is growing all across America as people leave Louisiana, Mississippi and Alabama looking for work and housing. We are trying to share food every day in your community. Please call to see how you can help in your area.

Many Survivors are now considered regular members of America's homeless population. In 1989, Food Not Bombs fed the people made homeless by the earthquake and after a few weeks the working class victims were forgotten and faced the same problems as those who were homeless before the earthquake. Because this could be such a long crisis it may be better for us to teach people how to organize their own local Food Not Bombs group so they can provide long-term support.

There are some things you can do that can help us respond effectively to this disaster.