Tucson peace activists organized a protest to end torture by the United States. Their peaceful action was listed as a terrorist threat along with 1,500 other protests 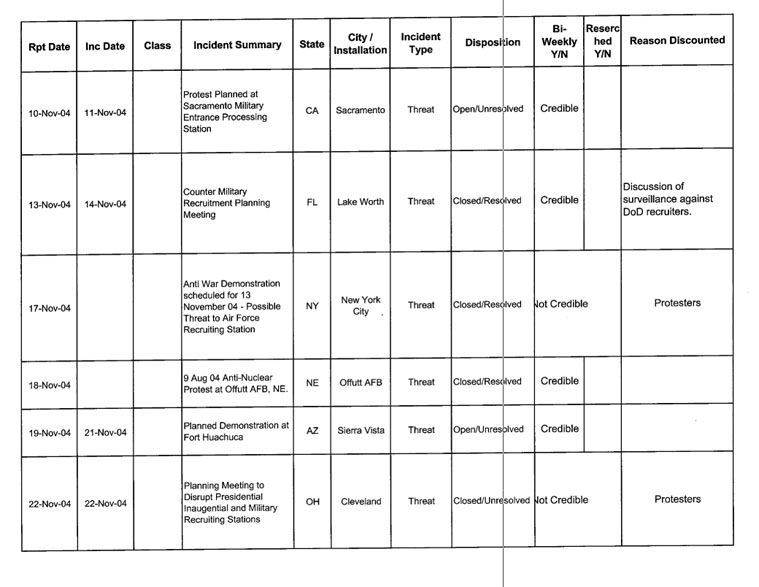 This is the first page of the TALON list published by MSNBC. 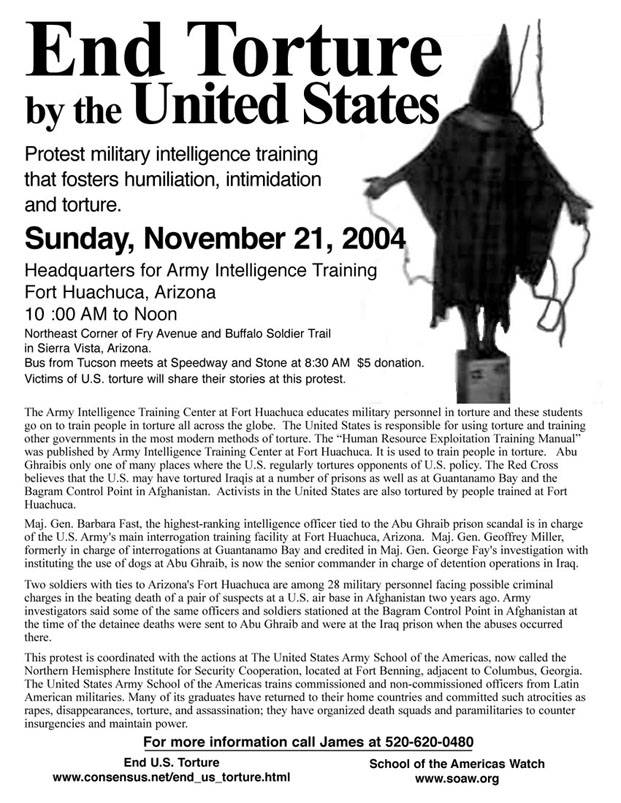 In November of 2004 several Tucson peace activists planned and participated in a protest against torture outside the Headquarters for Army Intelligence Training at Fort Huachuca, Arizona. According to NBC-TV the Pentagon's TALON program listed the protest as a serious ongoing credible threat. The 400-page report listed 1,500 protests that were spied on by the Pentagon.
On November 21, 2004 about 100 people peacefully held signs, banners and dressed in costumes. The protesters stood across the street from the entrance to Fort Huachuca, Arizona and the Headquarters for Army Intelligence where the research and training in torture originates. The Army Field Manual on interrogation is written here at Fort Huachuca. Many of the officers and soldiers responsible for the human rights abuses at Guantanamo Bay, Cuba, and at Iraq's Abu Ghraib prison are working at or were trained at the Headquarters for Army Intelligence Training.

Please read MSNBC's article and ask yourself if you believe nonviolent protest against torture should be considered a serious ongoing credible threat. Should the Pentagon be spending its time and our money spying on people who want the United States to end the use of torture?

Maybe the Pentagon should be worried about peaceful protests against torture. They were correct in listing the 2004 protest outside Fort Huachuca an ongoing credible threat to their continued use of torture because two years later the same activists are organizing another protest. Maybe they should consider these protests a serious threat because this year many more people are exspected to attend. Everyone is invited to join the Sunday, November 19, 2006 protest to end U.S. torture. The use of torture starts behind the gates at the Headquarters for Army Intelligence Training at Fort Huachuca, Arizona.


FIND OUT MORE ABOUT THE PROGRAM OF DOMESTIC SPYING AND TORTURE BY THE UNITED STATES
Why are we protesting outside the Headquarters for Army Intelligence Training at Fort Huachuca, Arizona?